Be a Hero: Anita’s Piano 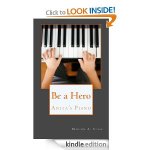 Marion A Stahl was touched by Anita’s story and inspired by her mission to teach about bullying and  social abuse. Marion embarked upon the task to retrace events, paint surroundings, as well as beget the young girl to bring forth her voice again as well as her adult message: “Be a Hero.” “Stahl’s book will inspire young adults to learn about WWII history and how not to repeat it.” Lara Moore.  Synopsis…